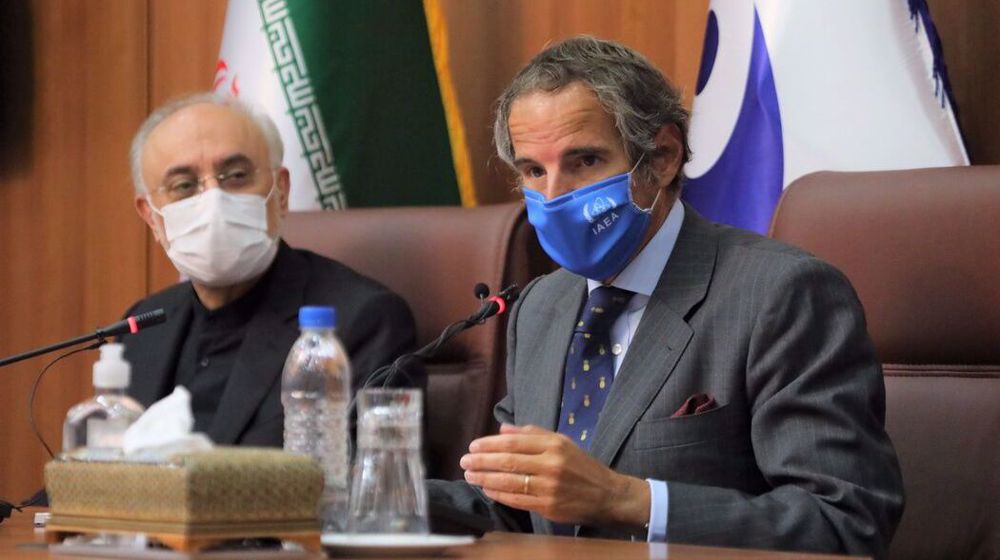 As the UN nuclear watchdog’s chief, Rafael Grossi, visits Tehran, the head of the Atomic Energy Organization of Iran has hailed the beginning of a “new chapter” in with the International Atomic Energy Agency (IAEA).

Ali-Akbar Salehi made the comments at a joint press conference with Grossi in Tehran on Tuesday following a closed-door meeting.

The IAEA chief arrived in the capital at the head of a delegation on Monday for talks with senior Iranian officials. He is to rejoin negotiations with Salehi later in the day, and is scheduled to meet with Foreign Minister Mohammad Javad Zarif and President Hassan Rouhani as well.

Salehi described his talks with Grossi so far as “very constructive,” adding, “A new chapter has opened [in the relations] between Iran and the IAEA.”

“With this trip, our joint cooperation will expand further,” the Iranian official said.

He hoped that the trip will bring along “gratifying results for both sides” in a way that IAEA will respect its statute as it deals with Iran, while Tehran keeps reciprocally honoring the Safeguards Agreement and Additional Protocol.

The Safeguards Agreement between Iran and the IAEA ensures non-diversion of nuclear material declared by the Islamic Republic. The Additional Protocol has also been allowing the agency’s inspectors to carry out more intrusive and unannounced inspections of the country's nuclear program.

During his talks with Grossi, it was agreed for the UN body to act independently and professionally concerning the Islamic Republic, which would likewise stay true to its obligations, Salehi said.

He noted that such an attitude on the part of each side would guarantee that each one’s performance would fit well within the standing regulations.

Salehi, meanwhile, pointed to the pressure that has been built up against Iran at the agency over the past years.

The IAEA closed a so-called possible military dimensions (PMD) case concerning Iran’s nuclear program in December 2015, in a move that showed the Islamic Republic had never diverted its nuclear work.

The case, which had been chiefly pushed by the United States and Israel, was closed after conclusion of a historic nuclear deal between the Islamic Republic and world countries earlier that year.

The US, however, left the deal in 2018, mainly under Israeli pressure. Ever since, it has been pressuring the agency together with Tel Aviv and others into finding an excuse for opening the case again.

In June, the IAEA’s Board of Governors passed a resolution — put forward by Britain, France and Germany — to push for intrusive inspections of two Iranian nuclear sites that the trio claims may have been used for undeclared nuclear activities in the early 2000s.

It was the Israeli regime’s spy service that first came up with the allegations of such activity at the two sites. Iran has, however, strictly rejected both the allegations and access to the sites, while reminding the agency that it should not be swayed by any third party for that matter.

“Over the past years that a fabricated case has been built against Iran at the IAEA, the Islamic Republic has not succumbed to demands that exceed legal frameworks, and will not do so in the future either,” Salehi likewise said.

“We act in line with our sovereignty and national interests. Our negotiations and performance now will stay within the framework of regulations and obligations, too,” he added.

Grossi, for his part, expressed delight at being able to visit Iran as the UN nuclear agency’s chief as opposed to a previous visit in his capacity as assistant director-general.

He noted that Iran and the IAEA had an “extensive agenda” at hand, saying bilateral talks mainly revolve around the peaceful application of the nuclear energy.

“We are moving forward and are hopeful of the future. There are definitely some issues at hand that will be resolved in due fashion,” he added.

The IAEA director-general, meanwhile, brushed off accusations that the agency’s actions concerning Iran have been influenced by foreign pressure during his term.