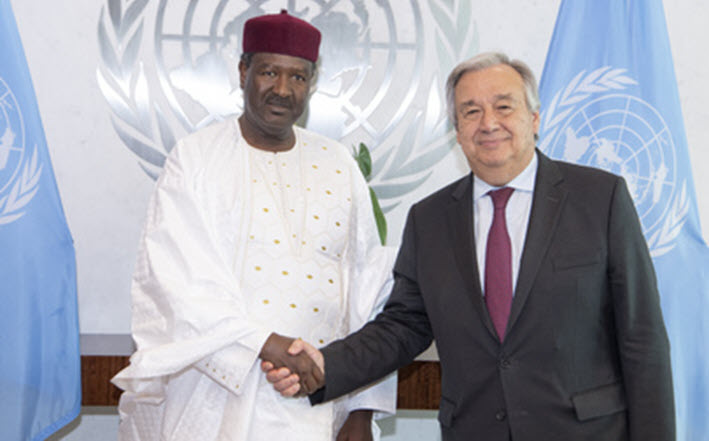 Niger, the U.N. Security Council president for September, said on Tuesday it stands by a declaration that no further action can be taken on a U.S. bid to trigger a return of U.N. sanctions on Iran because there is no consensus in the 15-member body.

“We’re staying with this decision... that was stated and announced by the president of the Security Council last month,” said Niger U.N. Ambassador Abdou Abarry, the latest sign of broad international opposition to the U.S. effort.

He said he is “staying aligned with the position as stated by the ambassador of Indonesia,” the previous council president.

Indonesia U.N. Ambassador Dian Triansyah Djani, the council president for August, said that he was “not in the position to take further action” against Iran because 13 members of the U.N. Security Council had expressed their opposition.

Niger’s position is key because it could come under pressure to introduce a resolution to move a snapback process.

The United States is trying to invoke the snapback mechanism in the multilateral nuclear agreement despite its withdrawal from the accord in May 2018 in violation of U.N. Security Council Resolution 2231.

The signatories to the Iran nuclear deal, officially known as the Joint Comprehensive Plan of Action (JCPOA), said Tuesday that they stood by the faltering accord and China slammed US efforts to restore international sanctions on the Islamic republic.

Tthe JCPOA signatories say the US does not have the legal right to trigger the provision set out in the nuclear deal because it pulled out of the Iran nuclear deal in 2018.

The US suffered a humiliating defeat in securing an extension of the UN arms embargo against Iran at the Security Council last month. Only the Dominican Republic voted ‘yes’ to Washington’s resolution calling for the extension of the embargo beyond October 18.