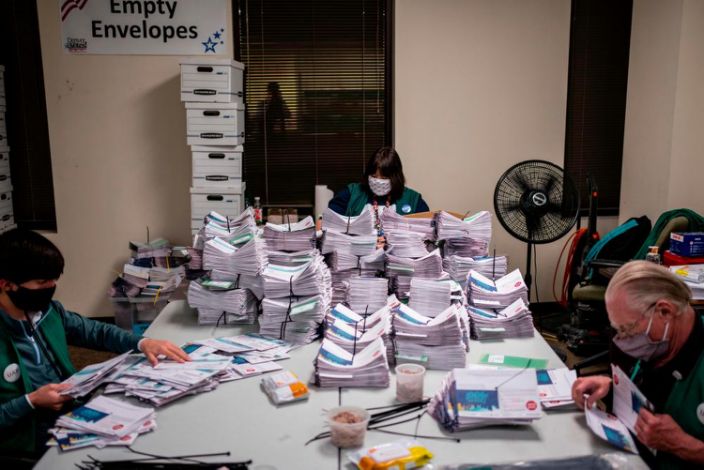 US President Donald Trump took the lead over Democratic rival Joe Biden in the vital battleground of Florida and other U.S. swing states on Tuesday, but Biden hopes he can win in Arizona and three Rust Belt states that could take days to count their votes.

Biden’s hopes for a decisive early defeat of Trump faded as the Republican president took solid leads in Florida, Georgia, Ohio and Texas.

It is projected that Trump would win Florida, a must-win state in his quest for 270 Electoral College votes.

Biden, 77, was eyeing the so-called “blue wall” states of Michigan, Wisconsin and Pennsylvania that sent Trump, 74, to the White House in 2016 for possible breakthroughs, although vote counting could stretch for hours or days there.

Trump held early leads in those three states, but much of that was built on Republican-heavy Election Day voting. The counting of Democratic-heavy mail-in ballots in all three states was expected to take hours or days.

Winning those three states would be enough to give Biden an Electoral College victory. Fox News projected Biden would win Arizona, another state that voted for Trump in 2016, giving him more options to get to 270 Electoral College votes.

Supporters of both candidates called the election a referendum on Trump and his tumultuous first term. The winner will lead a nation strained by a pandemic that has killed more than 231,000 people and left millions more jobless, racial tensions and political polarization that has only worsened during a vitriolic campaign.

Trump monitored election returns with members of his family in the living room of the White House residence. Going in and out of the room were first lady Melania Trump, his son-in-law Jared Kushner and his daughter Ivanka among others. “He’s calm, chilling,” said a source familiar with the scene.

A senior Trump aide, watching returns at the White House, described the mood there in a text: “Good. But nervous”