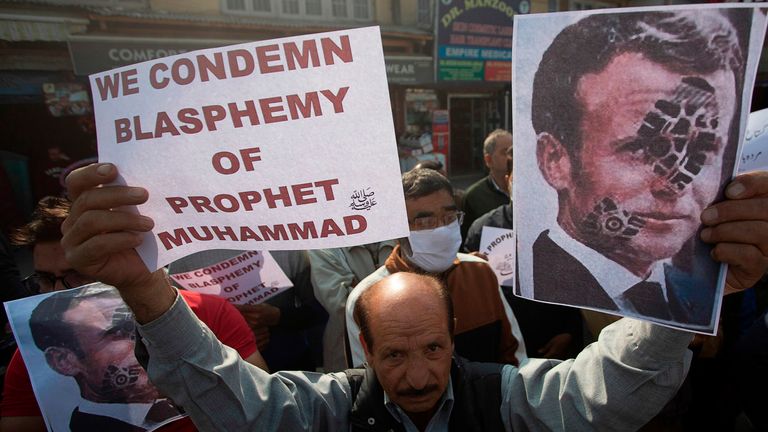 "This narrative that is racist and bigoted that leaders like Macron are espousing is to deter and strike fear and hatred," Muhammad Khalid Sayed, a lawmaker from South Africa’s governing African National Congress (ANC) party told Anadolu Agency.

"It is also a way of Macron trying to shift focus away from his own domestic problems amongst the French population around issues of corruption and cutting of social spending,” said Sayed, who chairs the provincial branch of the ANC Youth League.

“The move toward Islam in the West is striking fear in Western leaders like Macron and they use this narrative for cheap political means to stay relevant and in power.”

Macron sparked outrage across the Muslim world after he defended the right to blasphemy and described Islam as "a religion in crisis."

In September, Macron defended French satirical magazine Charlie Hebdo after it republished sacrilegious cartoons of Prophet Muhammad. On October 2, he claimed in a speech that Islam was “in crisis globally” and announced his plan “to reform Islam” to supposedly make the faith more in line with French values.

Muhammed Haron, a professor at the University of Botswana, said: "This French president’s statements and deportment should be condemned in the harshest of terms; for it is through these that he has perpetuated one form of hate crime.”

He referenced Turkish President Recep Tayyip Erdogan's remarks about "mental treatment" needed by Macron. "One concurs with Erdogan that Macron should have ‘his mental health tested,” according to Haron, who said, the French president’s remarks were Islamophobic. "It is a crime that has been articulated under the guise of ‘freedom of expression,’" he said.

"Like so many European orientalists, Macron thinks democracy and secularism are about being the same, and being identical, which is actually neo-Fascism," said Shafiq Morton, a photojournalist and television presenter in Cape Town, South Africa.

"How can Islam ever be in crisis when churches are closing down in Europe and more mosques are being built than any other place of worship?," Morton said asked. "It is not Islam, or Muslims, who are in crisis. It is their political leaders, corrupt, and venal figureheads with whom Mr. Macron fraternizes."

Several Arab countries, as well as Turkey, Iran, and Pakistan, have condemned Macron’s insult of Muslims and Islam.