Hundreds of Trump supporters march in US capital against election fraud 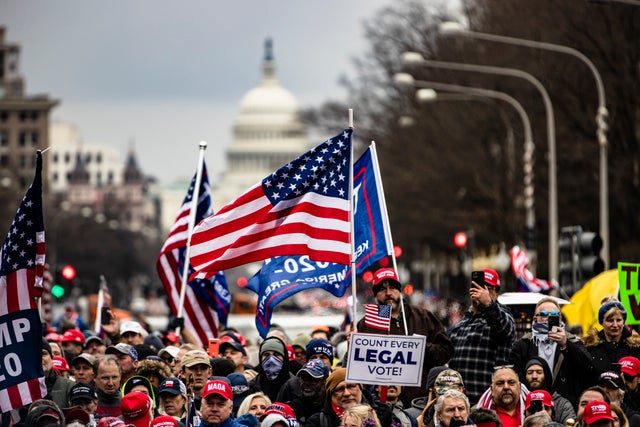 Hundreds of supporters of outgoing US President Donald Trump descended on America’s capital on Tuesday to back Trump’s claims of election fraud and his attempt to reverse Joe Biden’s victory.

The rally marks the third spate of large demonstrations in Washington, DC, disputing the election results.

The protestors came from across the US and gathered in Freedom Plaza, located just blocks from the White House, to decry the vote in the Electoral College.

The Republican president tweeted his support for the protesters: “Washington is being inundated with people who don’t want to see an election victory stolen by emboldened Radical Left Democrats.

Trump was expected to personally address his supporters in Washington on Wednesday during a rally on the Ellipse, just south of the White House.

Organizers planned to rally into the night on Tuesday and again all day on Wednesday. An afternoon march was also planned to the US Congress, where lawmakers will be voting to confirm the election results.

Many businesses in downtown Washington boarded up their windows, fearful that the protest could devolve into the unrest seen in May and June when dozens of businesses were vandalized.

With Biden set to be inaugurated January 20, Trump is intensifying efforts to prevent the traditional transfer of power. The challenge to the presidential election is on a scale unseen since the aftermath of the US Civil War, which took place from 1861 to 1865.

During a speech Monday night in Dalton, Georgia, Trump vowed he would “fight like hell” to hold on to the presidency amid growing desperation, and appealed to Republican members of Congress to reverse his election loss.

Trump also repeated numerous times his claims of election fraud, which have been rejected by election officials — Republican as well as Democratic.

US states run their own elections, and Congress has been reluctant to interfere. However, a coalition of 11 Republican senators have vowed to reject the Electoral College tallies unless Congress launches a commission to immediately conduct an audit of the election results.

Biden, speaking at a drive-in rally in Atlanta, said Trump “spends more time whining and complaining” than he does working on solving the coronavirus pandemic. He added dismissively, “I don’t know why he still wants the job — he doesn’t want to do the work.”