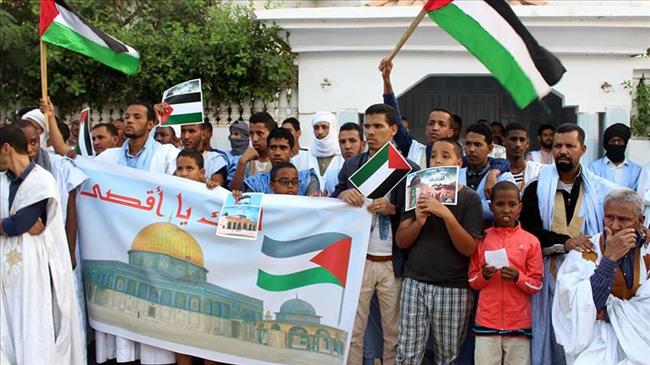 Lawmakers from Mauritania’s largest opposition political party plan to submit a bill to parliament seeking to criminalize the establishment of diplomatic ties between the North African nation and the Israeli regime.

The National Rally for Reform and Development called on all Mauritanian parliamentary factions and political movements to throw their weight behind the initiative, saying the bid preserves public dignity and is in line with attempts to stand against the Tel Aviv regime’s wills.

“In line with our principles, values, and constitutional texts, which cite Sharia as a source of law, and fulfillment of the aspirations of Muslims to support just causes of nations, especially the issue of al-Aqsa [Mosque] and the Palestinian cause, we highly demand the enactment of a law to criminalize normalization [of relations with Israel], and we declare our full readiness to do whatever necessary for such an honorable purpose,” the party said in a statement.

The development comes as three other opposition parties, namely Union of the Forces of Progress, the People's Progressive Alliance and the Alliance for Justice and Democracy/Movement for Renewal, called last week for legislation against normalization of ties with Israel.

The Muslim-majority country had expelled Israeli representatives and closed the regime’s embassy in Nouakchott a year earlier. The move came after it froze ties in response to Israel’s attacks on the Gaza Strip.

The Mauritanian government has frequently affirmed its firm support for Palestinians and their right to establish an independent and sovereign state with Jerusalem al-Quds as its capital.

Neighboring Morocco agreed on December 10 to normalize relations with Israel in a deal brokered with the help of the administration of outgoing US President Donald Trump, making the North African country the fourth Arab state last year to strike a deal aimed at establishment of relations with the regime. The others were the United Arab Emirates, Bahrain and Sudan.

Palestinians have condemned the peace pacts with the Tel Aviv regime as a treacherous "stab in the back" of their cause against the Israeli occupation.