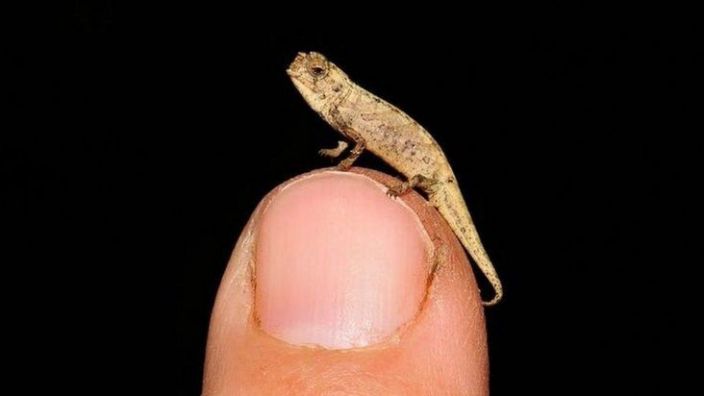 Scientists have identified Earth's smallest known reptile in an island nation in East Africa, warning at the same time that sustained destruction of forests in Madagascar threatens its survival.

Tiny enough to perch comfortably on a fingertip, the ultra-compact chameleon -- dubbed Brookesia nana -- has the same proportions and world-weary expression as its larger cousins around the world.

"We discovered it in the mountains of northern of Madagascar," Frank Glaw, curator of herpetology at the Bavarian State Collection of Zoology, told AFP in an interview.

A joint expedition in 2012 of German and Malagasy scientists did not know whether the two specimens collected -- one female and one male -- were adults until much later, he explained.

"We found out that the female had eggs in her body, and that the male had large genitals, so it was clear that they were adults."

Exceptionally large genitals, it turned out, accounting for nearly 20% of its body size, Glaw and colleagues reported in the journal Scientific Reports.

The male's body -- about the size of a peanut -- was 13.5 millimetres long, with the tail adding another nine millimetres.

By contrast, the female measured 29 mm from its nose to the tip of its tail.

The pair remain the only specimens of the species ever found.

Islands connected long ago to neighbouring continents are known for miniaturised versions of animals that crossed ephemeral land bridges, a phenomenon known as "island dwarfism".

"There are numerous extremely miniaturised vertebrates in Madagascar, including the smallest primates and some of the smallest frogs in the world," said co-author Andolalao Rakotoarison of the University of Antananarivo in Madagascar.

But the "island effect" does not apply to B. nana, which lives exclusively in mountainous regions some 1,300 metres (4,200 feet) above sea level, the researchers concluded.

"We have no good explanation as to why this species is so small," said Glaw.

What scientists do know is that the diminutive reptiles are likely teetering on the edge of extinction, even if the International Union for the Conservation for Nature (IUCN) -- keepers of the Red List of threatened species -- has yet to do an assessment.

"Habitat destruction is the biggest threat to the amphibians and reptiles of Madagascar," said Glaw.

"Maybe in the future it will be climate change, but for now it is deforestation."

Since the mid-20th century, Madagascar has lost about 45 percent of its forest cover.

B. nana and another mini-chameleon discovered by Glaw and his colleagues on a small island off the coast of Madagascar are especially vulnerable because their range is so small.

Brookesia micra lives on less than two square kilometres," Glaw explained. "One big catastrophic event -- a forest fire -- and the population might be lost very quickly."

Madagascar in a global "biodiversity hotspot", accounting for five percent of the world's unique plant and animal species.

The island nation has one of the highest rates of poverty in the world, and lacks resources for conservation and natural resource management.