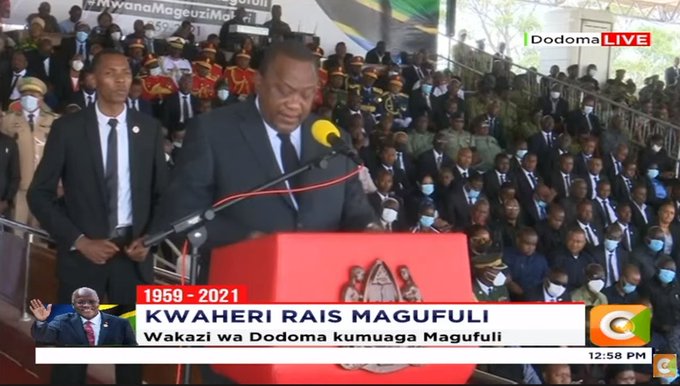 Kenya’s President Uhuru Kenyatta cut his speech on Monday in Tanzania after the Muslim call to prayer during the funeral mass of President John Magufuli.

Kenyatta who was eulogizing Magufuli, temporarily stopped his speech for two minutes in honour of the Adhan in a nearby mosque in Dodoma.

The adhan, Arabic for the Muslim call to prayer, has been a constant feature of life in the Islamic world for around 1400 years echoing from the minarets of mosques.

It serves to direct practicing Muslims to prayer preferably at their nearest mosque.

Magufuli’s sudden death came after weeks of uncertainty and rumours over his health as he disappeared from public view. He remained genuinely popular among many for his seemingly frank talk against corruption.

"I did not sleep since learning of his death last night. It's difficult to replace Magufuli who favoured poor people like me," said Bernard Mathias, who stood at a newspaper stall in Dar es Salaam.

The 61-year-old was born on the shores of Lake Victoria, where he grew up in a grass-thatched home, herding cattle and selling milk and fish to support his family. "I know what it means to be poor," he often said.

His humble background and no-nonsense, anti-corruption attitude won him the hearts of many Tanzanians, even as his slide into autocracy and stifling of democracy and free speech alarmed rights groups.