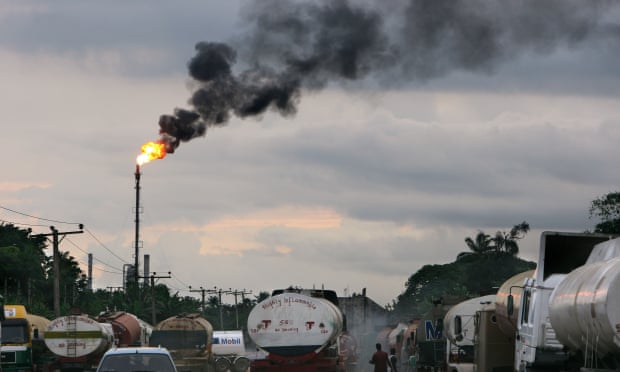 The people of Nigeria are paying a deadly price for importing Europe's dirty fuel. The government of Africa’s most populous country has failed to stop the importation of toxin-heavy fuel manufactured in Europe.

Tens of thousands of Nigerians die every year due to pollution, partly due to the highly toxic diesel and petrol that Europe exports to the African nation.

Shell, Exxon, Chevron and other major oil companies extract and export up to 2 million barrels a day of high quality, low sulphur “Bonny Light” crude from the Niger delta. But very little of this oil is refined in the country because its four state-owned refineries are dysfunctional or have closed.

Instead, international dealers export to Nigeria around 900,000 tonnes a year of low-grade, “dirty” fuel, made in Dutch, Belgian and other European refineries, and hundreds of small-scale artisanal refineries produce large quantities of illegal fuel from oil stolen from the network of oil pipelines that criss-cross the Niger delta.

The net result, says international resource watchdog group Stakeholder Democracy Network (SDN) in a new report, is that Nigeria has some of the worst air pollution in the world, with dense clouds of choking soot hanging over gridlocked cities leading to a rise in serious health conditions as well as damaged vehicles.

The extreme toxicity of the “official” fuel exported from Europe surprised researchers who took samples of diesel sold in government-licensed filling stations in Port Harcourt and Lagos. They found that on average the fuel exceeded EU pollution limits by as much as 204 times, and by 43 times the level for gasoline.

“Our research suggests that Nigeria is having dirty fuel dumped on it that cannot be sold to other countries with higher and better implemented standards. The situation is so bad that the average diesels sampled are of an even lower quality that that produced by artisanal refining camps in the creeks of the Niger delta,” said Florence Kayemba, SDN programme manager.

More than half of developing countries, mainly in Africa and Latin America, still use high-sulphur fuels which have long been illegal to burn in western countries.

According to industry sources which track legal and illegal oil cargo movements – who asked to remain anonymous – around 80% of Nigeria’s petroleum products come from the Netherlands and Belgium. The two countries have some of Europe’s largest refineries.

“This is even more concerning at a time when Nigeria is facing an outbreak of coronavirus. High levels of pollution and pre-existing respiratory and other health conditions may increase the risk that Covid-19 poses to the health of the population,” said Matthew Halstead of Noctis, which conducted the laboratory research.