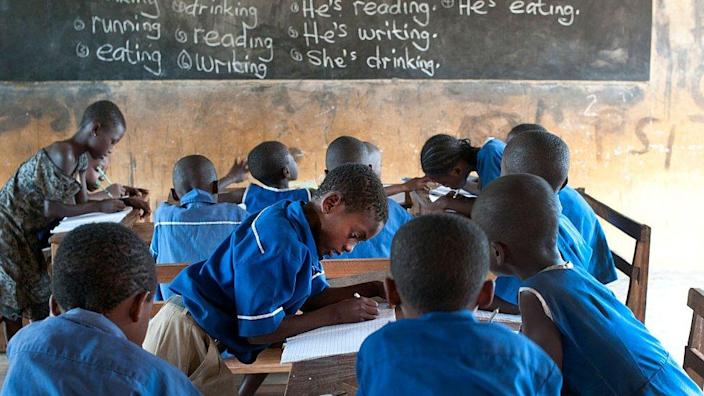 Despite an estimated 2,000 languages being spoken across Africa, there is still a tendency to see English and French, the languages of Britain and France which colonized most of Africa, as those needed to succeed and as a result some choose to abandon their mother tongue.

Kenyan writer Ngũgĩ wa Thiong'o has spoken about a linguistic famine in the continent - which he says is the result of prizing foreign languages over native languages.

In Ghana, which like South Africa and Nigeria was colonized by the British, this attitude is prevalent, says Ronald - a secondary school teacher in a rural area who also asked us not to use his real name.

"There is this stereotype that the smarter kids are the ones that speak English. Even parents that never went to school try to force it on their children to also be fluent in English.

"I know quite a number of people that have never travelled beyond the borders of Ghana, but they can't speak any language besides English."

But he feels some students would perform better if some of the textbooks and the language of instruction was in their mother tongue - and that this would stop children dropping out of school.

Some children who have grown up in Africa and forced to speak English facie an identity crisis as they become older.

Khahliso Amahle Myataza's family is from the South African township of Soweto in Johannesburg where they spoke Sotho, Xhosa and Zulu. But when Khahliso started primary school her family moved to a predominantly white neighbourhood of the city.

There were other black children in a similar predicament but they didn't make friends with each other - not wanting to be associated with others who did not speak English.

"To learn English I immersed myself with white kids. I didn't want to associate myself with the black kids any more. It was really difficult."

The 17-year-old's fluency has come with the realisation of how, not only being able to speak English, but to speak it in a certain way - can open and close doors in South Africa.

"When I go to a restaurant with my mum, and they hear her speaking Xhosa or Sotho, they will automatically assume we're not really here to buy expensive food.

"Then when they hear me or my brothers speak English, especially my brother, then we see people jumping."

For the parents of 22-year-old Nigerian Amaka, this too must have been apparent. When she was growing up in Lagos, English was the only language she was allowed to speak.

Her Igbo parents took her English language skills seriously and frowned on her using Pidgin, which is widely spoken in Nigeria as a lingua franca. Their attitude was: "English is the only proper language".

This was so engrained that Amaka says the fact that she could not speak Igbo did not bother her initially. "I was very kind of proud of myself in being able to speak English language the way I can."

But when she was about 15, she met her paternal grandmother for the first time - and they could not communicate or connect at all. "That was the first time I realised that: 'OK - this is an actual problem. This is a barrier.'"

'Am I really black?'

And Khahliso says her relationship with her mother tongues has changed as she is now less proficient in languages like Sotho and Xhosa.

She's unable to hold a conversation without turning to English words - an experience she describes as being "colonised by English".

Khahliso believes her situation - and that of Amaka - are not unusual. "A lot of black children in the middle-income class are facing that identity crisis of: 'I can't speak my native language.'

Amaka is working to overcome her identity crisis by taking Igbo lessons and immersing herself in Igbo culture through films and music. "Language gives you a sense of community," she says.