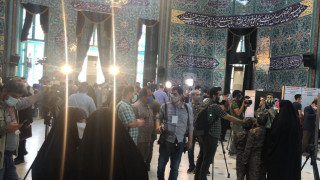 The number of reporters and the staff of Iranian and foreign media at Hussainiya Ershad in Tehran is no less than the people who stand in lines waiting for casting their votes.

Some 500 international journalists from 226 foreign media are covering the event in Iran.

The tens-of-meters-long line of people is filled with different gender and age, women and men and the youth and the elderly.

Iran’s presidential election is being held nationwide as well as in 133 countries across the world.

According to statistics from the Ministry of Interior, 59,310,307 Iranians are eligible to vote, out of which 1.3 million are first-voters and 3.5 million are Iranian expatriates.