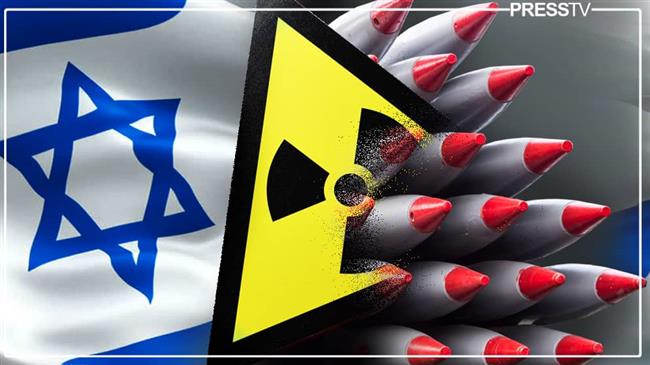 It is remarkable when you think about it: the grotesque hypocrisy of the West, and the US in particular, when it comes to the unconditional support provided to Israel.

We are talking, after all, about an entity, which since its inception, has existed in open violation of international law, responsible on a near daily basis for the crimes of ethnic cleansing, occupation, collective punishment, detention without trial, military aggression, invasion, and the mass killing of civilians, including women and children.

Less mentioned is the nuclear arsenal Israel has developed in conjunction with the West, and which it retains beyond the scrutiny of the International Atomic Energy Agency (IAEA) or any other international body. Israel is believed to have begun the full-scale production of nuclear weapons in 1967, after the Six Day War, but it was thought to have acquired its first operational weapon the year before, in 1966.

The Non-Proliferation Treaty (NPT), established to control the proliferation of nuclear weapons, came into being in 1968, a year after Israel began producing nuclear warheads on a mass scale, and still to this day Israel is not a signatory. Iran, which possesses not one nuclear weapon, is an NPT signatory, along with another 190 countries in the world.

Here, again, Israel has chosen the path of exceptionalism and deceit in its engagement with the rest of the world. And here, again, it does so with the acquiescence of Washington and its allies.

Thanks to the courage of dissident Israeli nuclear technician, Mordechai Vanunu, we also know that Israel in the 1970s aided the white supremacist apartheid state of South Africa to develop a nuclear weapon, able to do so as a non-signatory to the NPT.

The reason why all this is so important is that it makes the unyielding pressure Iran has come under to allow the IAEA to monitor its own nuclear energy program in its proper context – a major sign of abject hypocrisy and double standards applied by the West and the US.

The recent interim permit the new government in Tehran gave to the IAEA to reset its monitoring devices at the country’s nuclear facilities, amounts to a major concession. It confirms that the new government is going above and beyond in its efforts to resurrect the JCPOA, despite the fact that it was the rogue Trump regime that sabotaged it, largely at the behest of Israel.

Even more egregious has been Israel’s attempts to sabotage Iran’s nuclear program with the assassination of some of its nuclear scientists; assassinations thought to have been carried out in cooperation with the MEK, an organization responsible for countless terrorist attacks in Iran going all the way back to the 1980s.

In April this year a bomb went off at the Natanz nuclear enrichment facility, temporarily shutting down one of its sheds. Again, this was almost certainly the work of Israel’s notorious rogue security outfit, Mossad. Given that the bombing was carried out in advance of Iran entering talks with the US, UK, France, Germany, China and Russia to revive the JCPOA, this was an act of terrorism against not only Iran but the other governments concerned.

If Tehran decided to ramp up its nuclear program with the objective of producing a nuclear weapon, it would at this juncture be entirely within its rights, with Israel’s nuclear arsenal being tantamount to a dagger pointed at Iran’s heart. The absurdity of the West portraying Iran as unfit to possess nuclear weapons at the same time as it gives Israel its de facto blessing to possess them, is extraordinary and yet more proof that the real issue which ails our world is not the lack of democracy within some states, but the lack of democracy between states.

The hypocrisy when it comes to Israel’s ability to operate as a rogue entity cannot be ignored or excused any longer. It is the primary source of instability in the region and impedes the drive for peace, security and progress. However, only the most naïve could allow themselves to believe that Israel, no matter the regime, is interested in any of those aims. Its real aim has long been division, domination and hegemony.

Washington shares the same regional agenda; the attempt by the Biden administration to impose non-nuclear related conditions on sanctions relief and the resumption of the JCPOA leaves no doubt about it. Those conditions include questions surrounding Iran’s ballistic missile program and its ‘power projection’ in the region.

Power projection is a reference to Iran’s close relationship with Hezbollah and its support for the Palestinian resistance in Gaza, not forgetting its indispensable role in Syria in recent years.

Here’s the rub though. No Israeli attacks and incursions into Lebanon in the 1970s and 80s, no Hezbollah. No Israeli oppression of the Palestinians, no Palestinian resistance. For, in the last analysis, the truth enshrined in these words of Frantz Fanon is still today unshakeable: “In the colonial context, the settler only ends his work of breaking the native when the latter admits loudly the supremacy of the white man’s values.”

Only when a US administration appears in Washington willing to face the truth that Israel, not Iran, is the region’s rogue entity, and act upon it, will any meaningful progress be made. And with this in mind, a major test of the Biden administration will be how it responds to the recent publicly issued threat made by the Israeli military’s Chief of General Staff Avi Kochavi, to carry out military action against Iran’s nuclear program, going on to say that plans in this regard have been “greatly accelerated.”

Such madness confirms that Israel is not in need of an arsenal of nuclear weapons, it is in desperate need of an army of psychiatrists.

By John Wight, an author and political commentator based in Scotland.