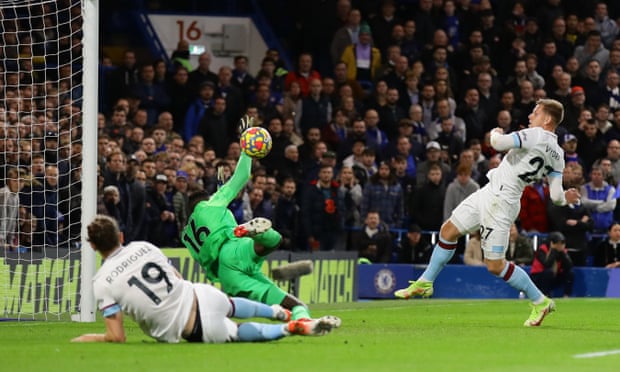 Premier League leaders Chelsea were held to a surprise 1-1 home draw by struggling Burnley after the visitors’ substitute Matej Vydra struck out of the blue late in the game to cancel out a Kai Havertz opener on Saturday.

The result left Chelsea on 26 points from 11 games, three more than second-placed Manchester City who beat Manchester United 2-0 away in their lunchtime derby. Burnley stayed 18th on eight points.

Chelsea missed a string of chances and were punished when Czech striker Vydra ghosted in a 79th-minute equaliser before Burnley held off a late onslaught by the home side.

The visitors also benefited from an inspired performance by goalkeeper Nick Pope, who produced a string of superb saves and was also a commanding figure in his area with Chelsea laying siege to Burnley.

Chelsea manager Thomas Tuchel was disappointed with the outcome although he praised his team’s performance.

“It was a fantastic 90 minutes when you look at performance,” Tuchel told the BBC. "That’s why everyone loves the game – a team can steal a point if the other team forgets to score the goals they deserve.”

Pope kept Burnley afloat early on as he denied Callum Hudson-Odoi and Jorginho but was powerless in the 33rd minute as Reece James and Germany forward Havertz combined to devastating effect.

James found space on the right flank and delivered an inch-perfect cross for Havertz to head low into the far corner from eight metres past Pope, who remained rooted to his line.

Chelsea kept pressing after the break as Thiago Silva’s header shaved the outside of the post before Havertz lofted a close-range shot over the bar and Pope blocked a Hudson-Odoi effort with a reflex save.

Those misses proved costly as Burnley levelled after their first meaningful raid, with Ashley Westwood swinging in a teasing cross which Jay Rodriguez nodded down for Vydra to tap in from close range in the 79th minute.

“This is not the first game like this and it won’t be the last,” Tuchel added. “It’s football, it was against us today. Another game we maybe get lucky and steal some points.”