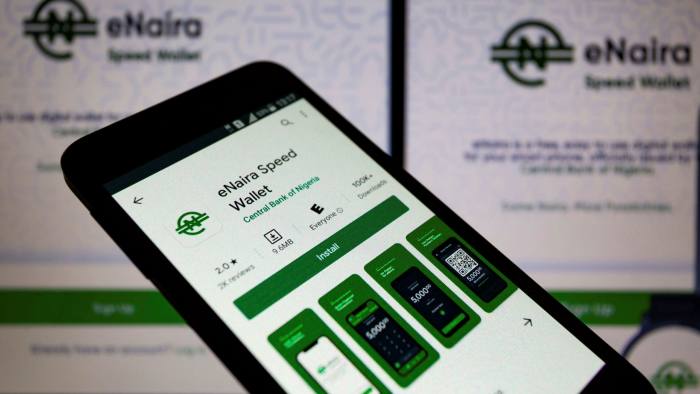 Hundreds of thousands of Nigerians have opened digital wallets to hold the eNaira, Africa’s first digital currency, but sceptics warn that government mismanagement and corruption could hurt its adoption.

With the launch of the eNaira on October 25, Africa’s most populous country became the latest country to launch a digital currency, leapfrogging many other central banks around the world, the Financial Times said in a report.

France, China and Germany are all testing e-currencies.

In a sign of how the development of official digital currencies is gathering speed, the G7 group of advanced economies last month laid out guidelines to ensure the currencies will “support and do no harm” to the traditional monetary and financial system.

Razia Khan, chief economist for Africa and the Middle East at Standard Chartered Bank, said central banks were reacting to “the demonstrated need to adopt digital payment channels” in the wake of the pandemic.

A senior Central Bank of Nigeria official said that the currency’s first week and a half — when nearly 400,000 new wallets were registered in dozens of countries and customers made 12,500 transactions worth 46.3m naira ($113,000) — was a “resounding success”. This was despite customers complaining about a cumbersome sign-up process.

Analysts questioned whether the digital version of the naira — which is built on blockchain technology, but is not a cryptocurrency — can fulfil the central bank’s goals for it: lowering transaction costs, boosting cross-border flows including inward remittances, bringing more people into the financial system and allowing for more targeted social and welfare spending.

“The issue is that all of this can already be adequately addressed using the existing financial payments system,” said Adedayo Ademuwagun, analyst at Songhai Advisory. “Nigeria is the fintech capital of Africa, so there are just so many options, so many ways to pay somebody, and pay them fast, already.”

At the official eNaira launch last month, Nigerian President Muhammadu Buhari said it could boost Nigeria’s gross domestic product — which was $432bn last year — by $29bn over the next 10 years.

Ronak Gadhia, an analyst for emerging markets-focused investment bank EFG-Hermes, said low-cost transactions could make the eNaira “quite significant and disruptive . . . but there’s some uncertainty about how widespread it will be used”. More than half of Nigerians lack a formal bank account, the informal economy represents more than half of GDP and 95 per cent of transactions are still done in cash.

The eNaira launch comes nine months after Nigeria’s central bank effectively banned cryptocurrencies including Bitcoin, which were used to fund the #EndSARS protests, on the grounds that they jeopardised the financial system and could be used to fund terrorism.

Nigeria has quickly become one of the biggest markets for cryptocurrencies in Africa, with citizens using it to get around capital controls, to generate income amid rampant unemployment and to hedge against the perpetually depreciating naira.

The decision to effectively ban crypto was condemned by many in the burgeoning Lagos fintech scene, which has attracted billions of dollars in venture capital in recent years.

Victor Asemota, a Nigerian tech investor, echoing the sentiments of others, said he was “at a loss on what eNaira is meant to solve”, in a post on Twitter last week. He argued that mobile money products offered by some Nigerian fintech companies already streamline payments and reduce transaction costs.

Gadhia agreed, but cautioned that it was too early to discount the eNaira’s potential. “In the context of the scale that Nigeria offers it seems low, but I wouldn’t say it’s entirely disappointing or surprising,” he said. “It seems modest at this stage, but I think it’s still early days.”