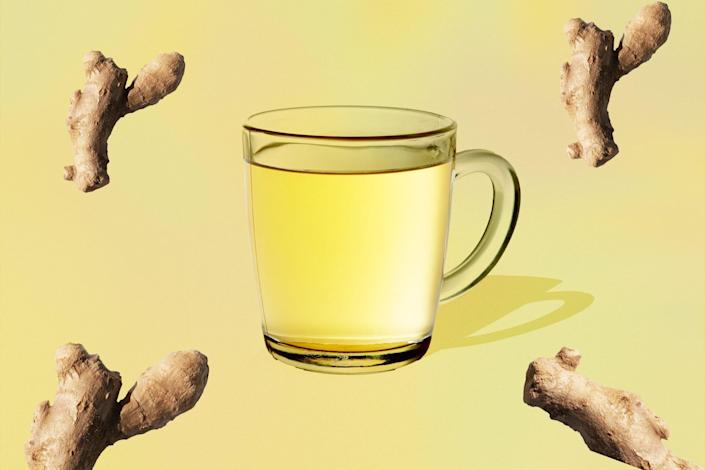 If you're looking to spice up your drink game, it might be time to try ginger tea. It's a bit sweet, somewhat peppery, and super nutritious. After all, the drink is teeming with good-for-you nutrients that support several areas of health, from brain function to blood pressure.

What Is Ginger Tea?

First, a bit about ginger, also known as ginger root. Ginger is the root of Zingiber officinale, a tropical plant that's related to turmeric and cardamom, according to an article from the National Center for Biotechnology Information (NCBI). Ginger has been used as a food and spice for thousands of years, according to North Carolina State University. Ginger root is also native to Asia (think: India, Japan, China), according to the National Center for Complementary and Integrative Health.

Ginger tea in particular is a caffeine-free drink made by steeping ginger in water. This infuses the water with ginger flavor, which is wonderfully spicy and pungent. Aside from the taste, this also enriches the water with ginger's beneficial compounds, according to Isa Kujawski, M.P.H., R.D.N., registered dietitian and founder of Mea Nutrition. The result? A highly nutritious beverage that's delicious to boot.

Ginger (and by extension, ginger tea) is packed with essential nutrients, including (but not limited to!) potassium, magnesium, copper, vitamin C, and vitamin B6, according to NCBI. The earthy ingredient is also chock-full of polyphenols, aka phenolic compounds, which are potent antioxidants that help stave off chronic disease. In ginger, the main polyphenols are gingerols, shogaols, and paradols, according to a 2019 scientific review in the journal Foods. In fact, these compounds are responsible for many ginger health benefits, as you'll soon see below.

Thanks to its impressive roster of nutrients, ginger tea is one of the healthiest beverages you can drink. Here are all the ginger tea benefits worth noting, according to research and dietitians. (Speaking of healthy beverages, is chia seed water all it's cracked up to be?)

ICYMI above, ginger tea is rich in antioxidants including gingerols, shogaols, and paradols. These substances help combat oxidative stress, thus reducing the risk of chronic disease. Here's the lowdown: Things such as environmental pollutants, UV radiation, and dietary choices can increase the body's production of free radicals (read: unstable molecules), which, in excess, can damage cells and cause oxidative stress.

This, in turn, can potentially lead to chronic conditions such as heart disease and cancer. But antioxidants, such as those in ginger tea, "work to stabilize these free radicals, [thus] limiting their damaging potential to the body," says Kujawski.

Feeling woozy? Trying sipping ginger tea. The beverage can help relieve nauseous feelings, and it's all thanks to — you guessed it — the antioxidants, namely gingerols and shogaols. These substances likely work by "stimulating gastric motility, or the muscle contractions that facilitate digestion," explains Kujawski. "This makes sense, as nausea [is] often associated with slow gastric motility." As a bonus, ginger also helps quell intestinal cramping, dyspepsia (indigestion), bloating, and gas, according to a scientific review in Food Science & Nutrition. This may be useful if you're experiencing these symptoms along with nausea.

Ginger can hinder the activity of the angiotensin-converting enzyme, or ACE, according to a scientific review in Frontiers in Pharmacology. This is key because ACE turns a substance called angiotensin I into angiotensin II, which narrows blood vessels and increases blood pressure, according to a 2019 review.

As the antioxidants in ginger tea thwart oxidative stress, they can also help manage blood sugar levels. That's because oxidative stress can lead to poor blood sugar control, and ultimately, diabetes. Basically, oxidative stress can damage certain cells in the pancreas that are in charge of making insulin, according to a review in the International Journal of Molecular Sciences. Insulin is the hormone that shuttles glucose from the blood and into the cells to be used for energy.

This can disrupt insulin production and blood sugar control. But the antioxidants in ginger tea can help; they work against the havoc-wreaking oxidative stress, thereby supporting optimal blood sugar levels in the body.

Next on the list of ginger tea benefits is its impact on brain health — and once again, it's all thanks to the antioxidant and anti-inflammatory compounds in ginger. Oxidative stress and inflammation can lead to neurodegenerative diseases such as Alzheimer's disease, according to a 2020 scientific review.

That's because oxidative stress and inflammation damage neurons (i.e. nerve cells in the brain), which are responsible for cognitive functions such as memory and learning. But the antioxidants in ginger — most notably, gingerol, shogaol, paradol — can protect the brain from oxidative stress and inflammation, potentially warding off neurodegenerative diseases, according to the aforementioned 2020 review.

Chronic inflammation can manifest as pain, including myalgia (muscle pain) and arthralgia (joint pain), according to NCBI. However, the anti-inflammatory effects of ginger could theoretically help ease pain. Ginger polyphenols reduce levels of inflammatory cytokines, thereby quelling inflammation in the body, as Kujawski mentioned earlier.

A scientific review of more than 20 studies also found that ginger may relieve pain due to various causes — including menstrual cramps, osteoarthritis, and migraines — by reducing inflammation and inhibiting prostaglandins, compounds involved in pain. However, the review also notes that while using ginger for pain relief shows promise, "more studies are needed to create a consensus about the dosage of ginger for long-term therapy."