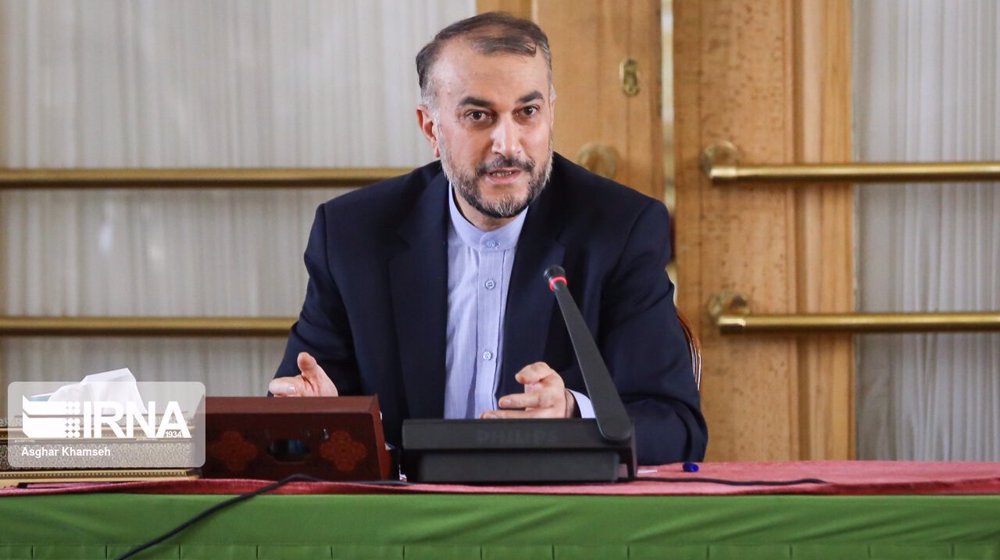 Iranian Foreign Minister Hossein Amir-Abdollahian has once again reaffirmed that Tehran has no intention to waste time or derail the sanctions removal talks in the Austrian capital of Vienna.

Amir-Abdollahian made the remarks in an interview with China Global Television Network (CGTN) before wrapping up his official visit to Beijing at the invitation of Chinese State Councilor and Foreign Minister Wang Yi.

Iran's top diplomat also criticized the West, particularly the US, for failing to present any innovative proposals in the negotiations.

"We assured Chinese officials that Iran is not playing with time or trying to derail the negotiations, and that we have made constructive, positive and realistic proposals at the negotiating table in Vienna," he said.

He hailed China's "constructive and rational" role in the Vienna negotiations, saying Beijing "is always opposed to the cruel unilateral sanctions imposed by the US on countries, including Iran, and condemns the bullying practices of the US."

The Iranian foreign minister added that in talks with his Chinese counterpart, he appreciated Beijing's support for Tehran's stance during the Vienna talks and expressed hope that China would continue supporting Iran's position.

He emphasized that China and Russia support Iran's constructive initiatives "but Western countries, including the United States, have so far offered no innovative proposals in the talks."

"If the parties can resume their commitments under the Iran nuclear deal, Iran will also return to commitments based on the agreement. If Iran can get the expected economic benefits from the agreement, so will all the parties," Amir-Abdollahian pointed out.

Iran and the remaining parties to the JCPOA – Russia, China, France, Britain, and Germany – have been holding talks in Vienna since April last year. Iran says it pursues the removal of all sanctions that the United States re-imposed on Iran following its withdrawal from the deal.

On Friday evening, the eighth round of the talks was paused so that the diplomats could return to their respective capitals for consultations. However, the working groups on sanctions removal and sequencing the implementation of a probable agreement continued to work on draft texts on Sunday.

Iran also argues that lack of initiative among the Western parties to the Vienna deal is the main factor slowing down talks with Iran.

Addressing a regular press conference on Monday, Chinese Foreign Ministry spokesperson Zhao Lijian voiced his country's strong opposition to "illegal and unilateral" sanctions against Iran, and "gross interference" in the internal affairs of the Islamic Republic and other countries in the region.