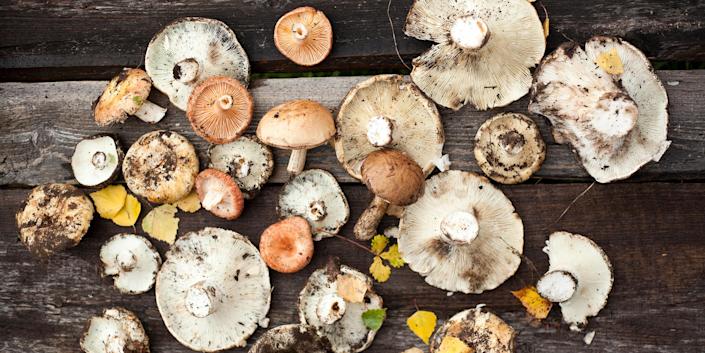 Mushrooms have long been used by traditional medicine practitioners, but these days the potential health benefits of mushrooms are being discovered by modern science, according to the Today news site.

Mushrooms provide some key vitamins and minerals — and they also have unique nutritional properties.

Mushrooms are rich in a range of nutrients that aren’t typical of many veggies. For example, mushrooms are the only plant-based, unfortified food that provides a substantial amount of vitamin D, a nutrient involved in immune regulation and bone health.

A cup of mushrooms is also a good source of selenium, a mineral that’s involved in immune functioning and that also acts as an antioxidant. Antioxidants are compounds that help prevent the type of cellular damage that’s linked to diseases, such as cancer, heart disease and Alzheimer’s.

Mushrooms are rich in potassium. Potassium is a mineral that helps expel sodium from your system. Since sodium is in the majority of packaged foods, most people exceed the amount needed in a day, yet at the same time, they’re falling short of their potassium needs.

This imbalance can set the stage for high blood pressure, which then increases the risk of heart disease and stroke. Adults need between 2,600 to 3,400 milligrams of potassium each day, and a cup of mushrooms has about 223 milligrams — that’s 8% of the daily requirement.

Mushrooms also contain B vitamins, riboflavin, niacin and copper, which contribute to their healthfulness.

Mushrooms may protect your brain

In addition to vitamins and minerals, mushrooms contain high amounts of two antioxidants: ergothioneine and glutathione. Over time, cells experience oxidative damage from free radicals, which are destructive compounds produced when you’re exposed to environmental toxins, whether cigarette smoke or sunlight. Cells also become damaged as a byproduct of metabolism.

To counter this damage and prevent free radicals from accumulating, you need to consume antioxidant-rich foods, like mushrooms. These particular antioxidants appear to protect your brain from illnesses, like Alzheimer’s and Parkinson’s diseases, and you won’t find many other foods with higher amounts than mushrooms, according to Penn State researchers.

Mushrooms can help you reach a healthier weight

Have you ever noticed that the texture of mushrooms mimics meat? One four-day study swapped mushrooms for beef in four meals (lasagna, napoleon, sloppy Joes and chili) with participants eating each meal made with either ingredient (mushrooms or beef) during the first week, and then switching to meals made with the alternate ingredient the next week.

Naturally, the meat-based meals were higher in calories, averaging about 420 more calories than the mushroom meals. But what’s striking is that participants were just as sated after eating the lighter mushroom-based meals — and they didn’t eat more later on to compensate for the leaner lunch.

In general, lowering your calorie levels while also eating whole foods, like mushrooms, that are filling is a strategy that can lead to healthy weight loss. In a small, year-long study that involved mostly women, those who swapped meat for mushrooms lost about seven pounds and achieved healthier body measurements and improvements in blood pressure and inflammatory markers.

While lowering calories is important for achieving weight loss, it’s also possible that mushrooms may help you manage your weight due to their influence on your gut microbiome. Mushrooms supply prebiotic fiber that may bring your gut into a healthier balance. This process is thought to play a role in weight management.

It’s estimated that there are more than one hundred thousand varieties of mushrooms, though only a fraction have been discovered. Among them, some are edible, some are used for wellness or medicinal purposes in supplements, teas and powders, and others are poisonous.