Imam Khamenei: Iran has made good progress despite US, Western sanctions 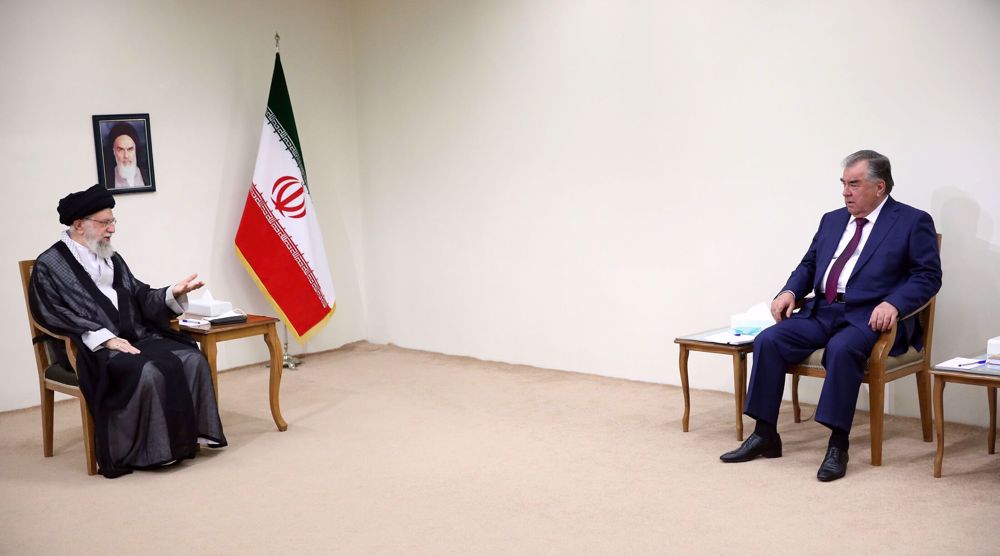 Imam Ali Khamenei, the Leader of Iran’s says the Islamic Republic has made good progress in various fields during past years despite the sanctions that were imposed on the country.

Ayatollah Khamenei made the remarks in a Monday meeting with the visiting President of Tajikistan Emomali Rahmon in Tehran.

“Despite the sanctions, the Islamic Republic of Iran has made good advances in various fields. If it were not for the sanctions, those advances could not be achieved, because sanctions caused [Iranians] to rely on their domestic capacities and [labor] force,” the Leader said.

Ayatollah Khamenei said the world powers use sanctions as a weapon against other countries, noting, “What renders this weapon useless is [paying] attention to internal forces and capacities [of a country].”

The Leader told the Tajik president that there are many potential grounds for further expansion of cooperation between the two countries to levels far above the present level.

“The relations between the two countries must undergo a major development in view of the Iranian government’s policy to strengthen relations with neighbors,” he said.

Ayatollah Khamenei said regional issues, especially the situation in Afghanistan, offer a major ground for cooperation between Iran and Tajikistan.

“Iran and Tajikistan share concerns about Afghanistan. Both countries are worried about spread of terrorism and growth of Takfiri groups in this country,” the Leader said.

Ayatollah Khamenei added, “We believe those who are now in power in Afghanistan must be able to form a comprehensive and inclusive government to take advantage of all groups.”

The Leader then touched on a recent trip to Tajikistan by Chairman of the Chiefs of Staff of the Iranian Armed Forces Major General Mohammad Baqeri and the inauguration of a manufacturing plant for Iranian drones in Tajikistan.

Ayatollah Khamenei said such cooperation between the two countries is of utmost importance, adding, “Today, drones are an important factor in [bolstering] security of countries.”

The Leader also lauded the efforts made by the president of Tajikistan to promote Persian language.

He noted that Iranian President Ebrahim Raeisi’s first foreign trip to Tajikistan proves how determined the Iranian government is about the expansion of relations with Tajikistan.

“[Bilateral] relations have been promoted during the last year, but they are still far from the optimal point,” Ayatollah Khamenei said.

The president of Tajikistan, for his part, said Iran and his country have common security concerns, especially about Afghanistan and spread of terrorism.

He added, “We want peace and tranquility in Afghanistan and a government representing all ethnic groups, and hope that such concerns could be overcome through further enhancement of security cooperation between Iran and Tajikistan."