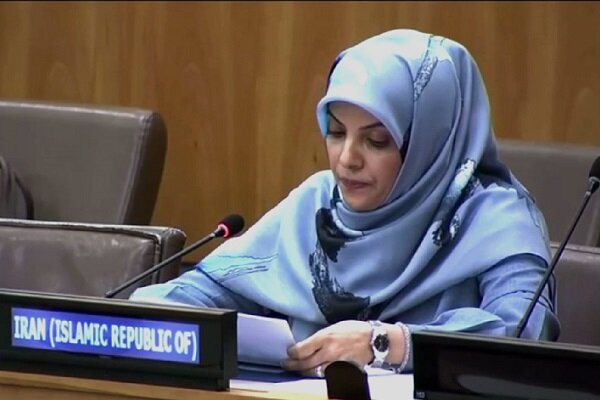 Iran's Ambassador and Deputy Representative to the UN said that the inaction of the UN Security Council has emboldened the Israeli regime to continue committing its crimes against the oppressed Palestinian people.

Speaking before the UN Security Council on Tuesday, Zahra Ershadi urged the Security Council to force the Israeli regime to immediately cease its systematic violations of human rights and international humanitarian law.

“The Security Council’s inaction has emboldened the Israeli regime to continue its crimes against the oppressed Palestinian people as well as its aggressions and malicious activities against the regional countries. The lack of accountability for such serious violations contributes to this impunity,” Ershadi said.

“The Security Council must uphold its Charter obligation to maintain international peace and security. The Council is expected to implement its own resolutions and compel the Israeli regime to immediately cease its systematic violations of human rights and international humanitarian law,” she said.

The top Iranian envoy lamented that the situation in occupied Palestine “remains dire” as the Israeli regime continues to “kill innocent people, including women and children, seize and demolish Palestinian homes, and forcibly evict Palestinians from their homes.”

Earlier on Tuesday, the Israeli military’s bulldozers razed down the houses belonging to Palestinian prisoners Yusef Aasi and Yehya Miri, whom the regime claims killed an Israeli settler back in April.

The structures were located in the village of Qarawat Bani Hasan in the northern part of the Israeli-occupied West Bank.