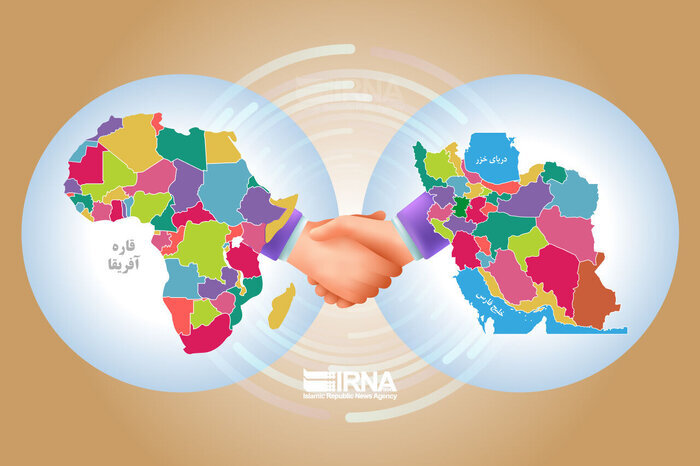 The potential benefits and opportunities of Iran’s positive relationship with African countries can be divided into two main categories: political and economic.

On one hand, considering the Islamic Republic’s political discourse, which evolves around supporting a movement towards a new world order, African nations, suppressed by the West and world powers for decades, are of utmost importance for achieving the country’s political agenda; and, on the other hand, Africa, as the second largest continent in the world whose Gross Domestic Product (GDP) is close to five trillion dollars, can present great economic opportunities for Iran.

The presence of Iranian exporters in Africa’s $523-billion import market would make a huge difference for the Islamic Republic’s economy which is tried to be distanced from oil revenues over the past few years.

Unfortunately, Iran’s relations with Africa have been mainly limited to political aspects and the share of the Islamic republic in the continent’s huge market has been less than 0.5 percent.

Therefore, recently the Iranian government has been placing great importance on improving its economic relations with African countries, and especially the 13th administration has taken huge steps in this regard, the result of which are very tangible.

Considering the importance of developing non-oil exports in Iran’s economic policies, it seems that paying more attention to Africa and identifying the economic potentials of this continent’s vast markets can be considered a very logical measure for realizing Iran's goals in this regard.

Rich with opportunities, the African continent can help the Islamic Republic expand its global influence, both regionally and globally by providing untapped alternate markets and trade opportunities.

The positive relations between Iran and African countries throughout history should be considered a favorable and effective factor that the Iranian government can benefit from in promoting the country’s economic relations with the mentioned nations.

Iran’s position as an observer member of the Organization of African Unity (OAU) can also provide the basis for major economic and political cooperation at the regional and extra-regional levels between the two sides.

African countries’ desire to progress under the framework of this regional organization gives Iran the opportunity to benefit from its presence in the African Union as a tool to accurately and realistically identify the economic capacities of its African trade partners.

Another factor that should be focused on in promoting economic relations with Africa is Iran’s influential role in the energy market and the geopolitical and geostrategic position of the country in West Asia which can also help the African Union to pursue its political and economic goals in the said region.

Challenges and obstacles of economic ties

Despite the vast opportunities, there are of course challenges for Iran's presence in Africa one of the most important of which is the influential presence of Western countries, especially the United States in this region.

The monetary and financial dependence of African countries on the West, especially the United States - which is in a political and economic conflict with Iran – as well as the expectation of receiving financial aid and facilities from Iran instead of forging relations based on mutual benefit, are also major challenges facing Iran.

Positive measures and their outcomes

Considering the abovementioned challenges and opportunities, over the past few years, the Iranian government has started following new strategies for the improvement of economic relations with Africa.

In August 2021, newly elected Iranian President Ebrahim Raisi in his visit to Guinea Bissau indicated that “Tehran would pursue comprehensive development of relations with African countries”.

He pointed out that the Islamic Republic of Iran would be “a real partner and pursue policies of mutual interests with Africa”.

This announcement by President Raisi was a clear indication of the Islamic Republic’s renewed interest in Africa.

In line with the government’s determination, Iran’s Trade Promotion Organization (TPO), as the international body of the country’s Industry, Mining, and Trade Ministry, started implementing the government’s new programs for promoting trade with Africa.

In June, TPO Head Alireza Peyman-Pak said his organization was taking the necessary steps to increase annual trade exchanges with African countries to $5 billion by the Iranian calendar year 1404 (begins in March 2025).

According to the official, considering the infrastructural and logistics problems in trade with Africa, TPO has defined a comprehensive plan based on which four major countries (Kenya in the east, Algeria in the north, South Africa in the south, and Nigeria in the west of the continent) have been selected as the focal points and trade with other countries will be pursued through them.

Opening trade centers in the mentioned countries and achieving barter trade agreements with them are among the major plans that the TPO is currently seeking to materialize its goals with regard to Africa.

According to Director-General of TPO’s Africa Office Mohammad-Sadeq Qanadzadeh, Iran is planning to open seven new trade centers in countries of the continent by the end of the current Iranian calendar year (March 20, 2023).

“Given the implementation of barter trade mechanism by the Trade Promotion Organization with several countries, we hope to benefit from this platform with African trade partners as well,” Alaei said.

The Industry Ministry has also held several seminars, conferences, and meetings to introduce the potential and capacities of African countries to Iranian traders.

To this end, a meeting to review business opportunities between Iran and Africa is being held regularly and, in each session, the opportunities and challenges of trade with one African trade partner will be introduced and discussed.

So far two sessions of the mentioned meeting have been held, focusing on South Africa and Senegal.

Exchanging trade delegations, forming new joint economic committees or activating the existing ones, and deploying commercial attachés to African countries are also among the important steps that the government has taken in the past few months.

The mentioned measures have resulted in a significant surge in the volume of trade between Iran and Africa over the past year.

Based on the data released by the Islamic Republic of Iran Customs Administration (IRICA), the value of Iran’s export to Africa rose by 50 percent in the first six months of the current Iranian calendar year (March 21-September 22) as compared to the same period in the previous year.

According to IRICA Spokesman Ruhollah Latifi, the value of trade between Iran and Africa has increased by 27 percent in the first half of the current year.